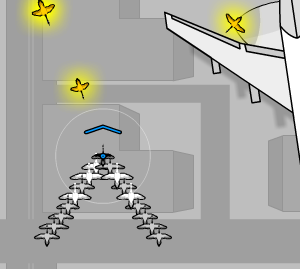 At A Glance:
Genre: Mouse Avoider/Arcade/Action
Link: Kongregate
Difficulty: Variable
Warnings: Some cartoon blood. Can be traumatic if you were on that one plane flight brought down by geese. Or if you’re Fabio.
Control Scheme: Mouse
Number of Geese harmed for this production: Zero (thanks largely to special effects)
The Set Up:
Chances are, you don’t think much about geese. They are, for the most part, large ducks that hang around the water during Spring time, and then they are gone. But, oh, there’s so much more to it than that. Geese are big, and they are mean. They poop all over the place and if you get near them, they go straight for your fingers.
But, um, that’s not what developer Hot Air Raccoon was going for, so, scratch that. With Endless Migration, the whole point is to see what life is like from behind the beak so to speak. In fact, it might seem that geese have a reason to be vicious little buggers, given that every migratory season they have to deal with passenger jets, fighter planes, and UFOs (what? you think rednecks living out in Podunk, Nowhere are the only ones that got to worry about aliens?). And through it all, you’re supposed to grow and protect your flock. Good luck with that.
The Low Down:
I love game design competitions. Compos seem to do such a lovely job of focusing the creative juices of developers and surprisingly wonderful games almost always seem to result. The competition in this instance was the Long Lasting contest over at Kongregate and was sponsored by Stride chewing gum. The point behind this competition was to create a game that tested the player’s endurance by creating an experience that continued on in perpetuity. After a considerable number of entries, Endless Migration emerged the victor and for good reason.
Mouse avoiders are among the oldest, simplest, and frankly uninspired genres in the world of alternative gaming, but from this humble frame was born a game that is quietly beautiful while at the same time offering a level of depth not common in games of its type.
Visually, Endless Migration does what it has to. Elementary graphics would not do for such a game as the effect would collapse with the relatively simple gameplay, and overly complex aesthetics could either bog the game down or wind up coming off gaudy. Instead, Raccoon threads a needle, coming up with a visual style that is simple, but consistent and elegant, relying on classical lines to give the game the visual grace it needs.
As for gameplay, enough adjustments, concessions, and additions are made to give this game an added level of dimension that you don’t see in your common mouse avoider game. On the other hand, the core principles remain simple and therefore engaging and accessible. The flock gathering and protecting mechanic is one of the keys at work here because at once it makes the game more challenging as the larger the flock, the harder it is to protect. Yet at the same time, it also makes the game easier, since each goose in your flock acts essentially as an extra life.
The contour of gameplay is further shaped by a series of upgrades and achievements. Upgrades usually make the game easier, and subtly change the dynamics, though it should be said that some of the upgrades will actually make a few of the achievements a little trickier to get. The achievements, meanwhile, give you goals to work with beyond merely seeing how far you can go.
In the end, I find games like this incredibly fascinating. That is to say, I am usually intrigued when I see stale old formulas being resurrected with a breath of new life. Is Endless Migration one for the ages? Hardly, but it does a fine job of injecting a little vitality into a tired genre and providing a pleasant surprise in one of those places one would be least likely to look.

This entry was posted on Wednesday, January 6th, 2010 at 2:39 pm and is filed under Reviews. You can follow any responses to this entry through the RSS 2.0 feed. You can leave a response, or trackback from your own site.

One Response to Review: Endless Migration